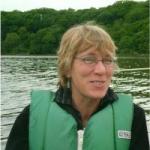 Clare Murphy is currently an Associate Professor in Physical Chemistry at the University of Wollongong, Australia in the School of Chemistry. She began her scientific career in 1990 as a “Scientific Officer” for the Radioactivity Group at the National Physical Laboratory (NPL) in the UK. In 1994, Clare moved to the Environmental Standards Group in the analytical Science Team at NPL to help in the European research efforts to determine the extent of stratospheric ozone depletion in the northern polar regions. Her research involved solar remote sensing of atmospheric trace gases using Fourier transform spectroscopy as part of the Network for Detection of Atmospheric Composition Change. In 2002, Clare moved to Australia to work as a research scientists at the University of Wollongong in the Centre for Atmospheric Chemistry and began her doctorate work in 2004 at the same University. Upon completion of her Ph.D. in 2009, Clare became a lecturer in Physical Chemistry at the University of Wollongong. She continues her research in solar remote sensing of atmospheric trace gases, has been involved in a number of satellite validation exercises, and has broadened her research interests to include ground level atmospheric composition with a focus on fires and air quality.