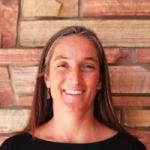 Megan was born in Boulder, Colorado and raised in the mountains west of Boulder in a home that is off the grid, powered by a wind generator and solar photovoltaic modules. This unique experience is the foundation of her career as an atmospheric chemist. In 2000, Megan received two Bachelor of Arts degrees, in Chemistry and in Spanish Literature, from Colby College in Waterville, Maine. She continued her education at the University of Colorado in Boulder earning a Master of Arts and a Ph.D. in environmental engineering in 2002 and 2006. Megan conducted her Ph.D. research at the National Oceanic and Atmospheric Administration (NOAA) with The Chemistry and Climate Process group in the Earth System Research Laboratory (ESRL) under the guidance of Susan Solomon. Her graduate research focused on airborne differential optical absorption spectroscopy (DOAS) observations of nitrogen dioxide and sulfur dioxide emissions from power plants and urban areas as part of the Texas Air Quality Study (TexAQS) 2000 and the New England Air Quality Study (NEAQS) 2004.

Upon completion of her doctorate work, Megan received the National Science Foundation International Research Fellowship Program award to conduct research at the Universidad Nacional Autnoma de Mexico (UNAM) in Mexico City, Mexico. Her research in Mexico City focused on identifying transportation events to the south of Mexico City using nitrogen dioxide DOAS observations as part of the Megacity Initiative: Local and Global Research Observations (MILAGRO) 2006 ﬁeld campaign. Following her post-doctoral work in Mexico, Megan was awarded an AAAS Science and Technology Policy Fellowship. As an AAAS fellow, Megan worked at the U.S. Environmental Protection Agency on a wide breadth of projects on global change research. Currently, Megan is using her demonstrated excellence in scientiﬁc research coupled with her international and policy experience to coordinate activities as the Director of the International Global Atmospheric Chemistry (IGAC) project at the University of Colorado’s Cooperative Institute for Environmental Sciences (CIRES). In addition to her role of coordinating and fostering atmospheric chemistry research toward a sustainable world as the IGAC Director, Megan’s research interest is air pollution. She is interested in air pollution and climate change interactions, the impact of urbanization on air pollution and air pollution policy.