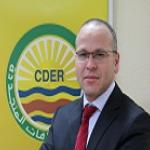 Prof. Dr. Noureddine Yassaa is the Director of "Centre de Développement des Energies Renouvelables" in Algeria. He is also a Professor of Chemistry at the University of Science and Technology Houari Boumediene (USTHB) in Algiers, Algeria and leading a research group in Environmental Science. He received his doctorate in Chemistry in 2001 from the University USTHB. He conducted some of his doctoral research at the Institute for Atmospheric Pollution, National Research Council (IIA-CNR) in Rome, Italy. He worked at the Max-Planck Institute for Chemistry (MPI-C) in Mainz, Germany as a Research Scientist between 2004 and 2008 and then as a Visiting Scientist between 2008 and 2012. From 2010 to 2013, he served as the President of the Scientific Committee of the Organic Chemistry Department at USTHB. Prof. Yassaa is a member of the editorial board of Atmospheric Measurement and Techniques and an expert reviewer of several national and international research projects. He is also coordinator of the ChArMEx (the Chemistry-Aerosol Mediterranean Experiment) project in Algeria and a member in a number of national and international committees. In 2010 he received the first CHEMRAWN VII (Chemical Research Applied for World Needs) Prize for Atmospheric and Green Chemistry from the International Union for Pure and Applied Chemistry. His current research focuses on atmospheric chemistry, sustainable development, renewable energy, and climate change.