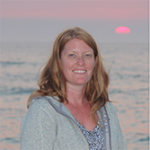 Jennifer Murphy is an Associate Professor in the Department of Chemistry at the University of Toronto, where she has held a Canada Research Chair since 2007. Her doctoral studies at the University of California, Berkeley (2000-2005) focused on measurements and analyses of nitrogen oxides and ozone. As a postdoctoral fellow at the University of East Anglia (2005-2006), she made measurements of volatile organic compounds from the British research aircraft during the AMMA campaign in West Africa. Her current research program focuses on the atmospheric chemistry and biogeochemistry of reactive nitrogen species, including nitrogen oxides, nitrous acid, ammonia, and amines. Her group has carried out fieldwork in California, Colorado, Utah, Michigan, Ontario, the Alberta Oil Sands Region, and the Canadian High Arctic. Jennifer is an Editorial Board member of the journals Atmospheric Chemistry and Physics andGeochemistry Journal, and a council member of the Royal Canadian Institute for the Advancement of Science.