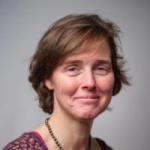 Pieternel Levelt studied Chemistry at the Free University of Amsterdam, and obtained her Master degree in 1987 in Physical Chemistry. She did her PhD at the Physics department of the Free University of Amsterdam, building an XUV laser and performing spectroscopy and obtained her degree in 1992. In 1993, she started working at the Royal Netherlands Meteorological Institute (KNMI) on satellite data-assimilation in atmospheric chemistry models and on the validation of the European satellite instruments GOME and SCIAMACHY. In 1998, she became Principal Investigator (PI) of the OMI instrument (launched on NASA’s EOS-Aura satellite in 2004) and she is still responsible for the international scientific program of OMI. She is the scientific founder of the new Dutch/ESA TROPOMI satellite instrument (PI from 2003-2009), launched in 2017 on the ESA/EU sentinel-5 precursor. In September 2007 she became part-time Professor in Satellite observations of the atmosphere at the Technical University in Eindhoven. She switched to the Technical University of Delft in 2011, where she held her inaugural address in 2012. In October 2009 she became Head of the Climate Observations Department at KNMI, later transformed to R&D Satellite Observation Department at KNMI, that is amongst others responsible for the OMI and TROPOMI PI projects. She is member of the Mission Advisory Groups (MAG) at ESA for the EU Copernicus sentinel 4, 5 missions and chaired ESA’s s5-precursor/TROPOMI MAG. Other advising positions include: ESF European Space Science Committee (ESSC) (2008- 2014), International Ozone Commission (IO3C). and TNO Industry Advisory Board. Her scientific expertise lies in performing and interpreting satellite observations of the Earth’s atmospheric chemical composition in the context of climate change, air quality and the ozone layer. Currently she leads the scientific team for the new nano satellite instrument TROPOLITE/SPECTROLITE, which will enable 1 x 1 km2 air quality and emission measurements from space. Since May 2016 she is also Professor at NUIST University in Nanjing, China, where she also initiated the KNMI-NUIST co-operation centre on atmospheric composition. She has been visiting scientist at NCAR-ACD in Boulder, CO, USA in 1997 and 2018,  and at NASA GSFC, Washington DC in 2007. Since 2021, she is the director of NCAR's ACOM laboratory.